A Death in Yellowstone

Any way you look at it, Yellowstone can kill. On a macro scale, Yellowstone’s most recent eruption, some 600,000 years ago, may have been responsible for killing off large swaths of life for hundreds of miles in all directions. And it may do so again.

On a much smaller scale, individuals die every year in the park. The day we arrived, we learned that Norris Geyser Basin was closed because someone had disregarded safety signage, and died. He strayed from designated the path, and fell through a thin crust of earth covering a thermal feature.  His body wasn’t recovered, and there’s a reason why.

Yellowstone is permeated by underground hydrothermal features, sort of like hot-water plumbing. Super heated underground arteries are vastly intricate, and largely unexplored. They are also dynamic.

The thousands of thermal pools you can witness here look still and calm, but the water is actually always circulating. Up and down, in and out of the plumbing.

Scientists believe that the water you see surfacing in a thermal pool may have been rain water that fell to earth hundreds of years ago. When an object is thrown, or falls, into a pool, including a human body, it doesn’t just stay where it falls. Many times, its sucked into the earth. Into the plumbing.

Its heartbreaking when folks lose their lives each year (like clockwork) in Yellowstone. The lives of their families and friends are changed forever.

Yet, at the risk of sounding insensitive, to walk off of designated paths is pretty dumb . Especially, in a place like Yellowstone

Here’s a picture (thank you, internet) of some boneheads walking out onto the Grand Prismatic Spring. They were apparently fined $8000 for the privilege. A small price to pay, if you ask us. They’re lucky they didn’t become statistics.

So, How Many Deaths in Yellowstone Are We Talking About?

At least 300 people have died in Yellowstone according to this article, not including auto and snow-mobile accidents. The number may even be higher, since these are only the  documented ones.

We see a lot of people these days who can’t seem to stay behind the roped off areas. Its almost a form of mania. Regardless of where the authorities draw the line, some folks just have to cross it.

But the risks are real.

Please, when you visit Yellowstone, or any national park, follow the rules. Stay on paths, and stay off of restricted areas. Stay safe and live to hike another day. The life you save may be your own. 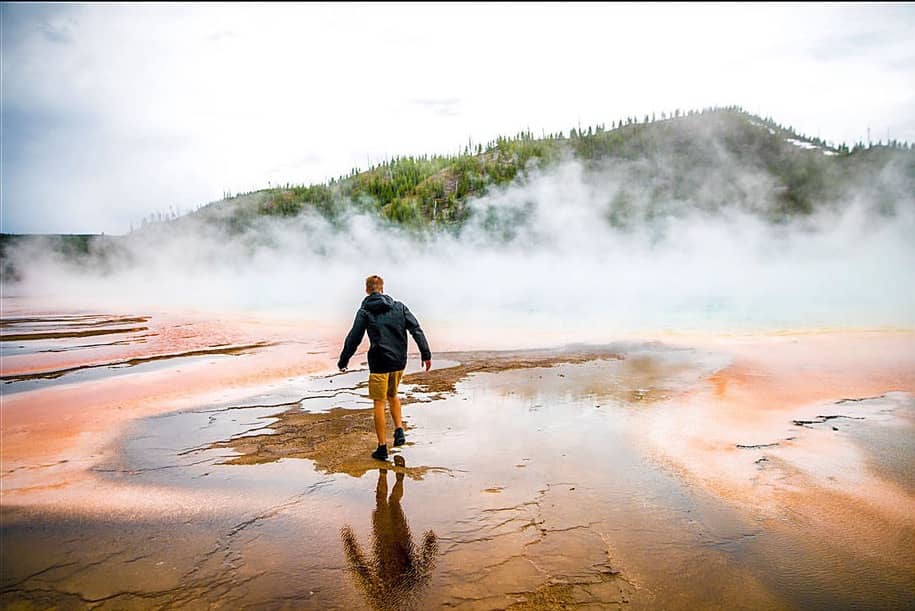 We have a saying in our family. “When we pause, nature reveals itself.” Or, when we slow down enough, we tune in to the order of things. We allow time to enough to experience a place, and mother nature reveals herself. Sometimes, with deadly consequences. 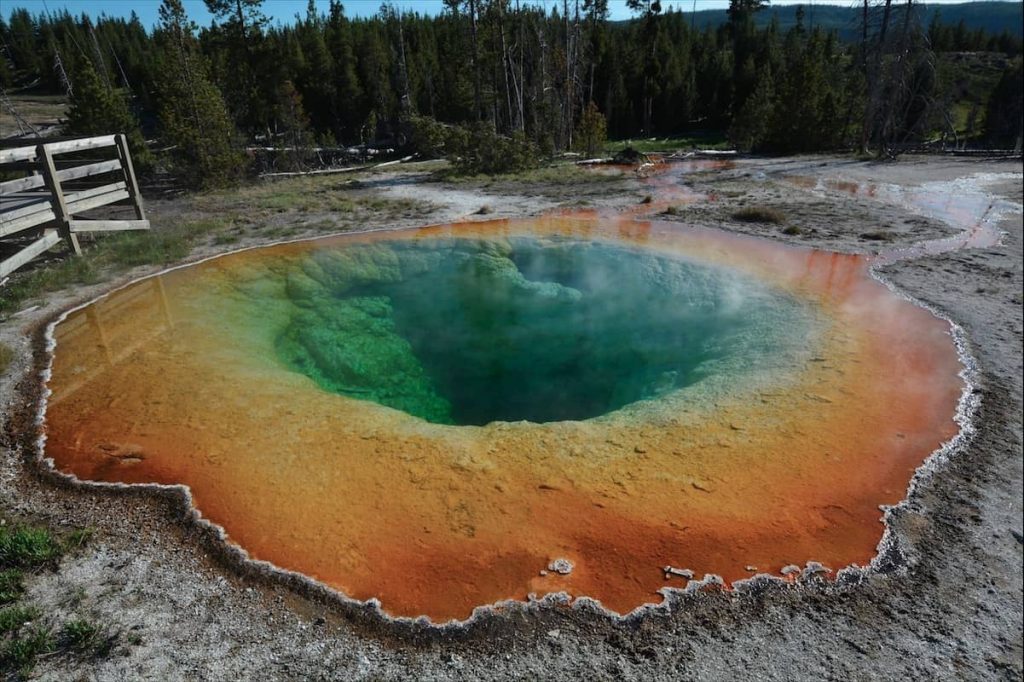 The silence was broken in Upper Geyser Basin (to which Old Faithful belongs) when a yellow-bellied marmot begin to alert. We  were meandering along the boardwalk, mesmerized by the beauty of dozens of thermal pools, when we heard it.

And it didn’t sound happy.

It was sitting among rocks in the small rise above us. It was obviously perturbed, but we couldn’t tell why. Then, the coyote appeared from out of the underbrush, and we knew instantly what the fuss was about.

The coyote was holding a different (and dead-looking) marmot in its mouth. The marmot above us continued to yelp as the coyote stole away his friend or family member. 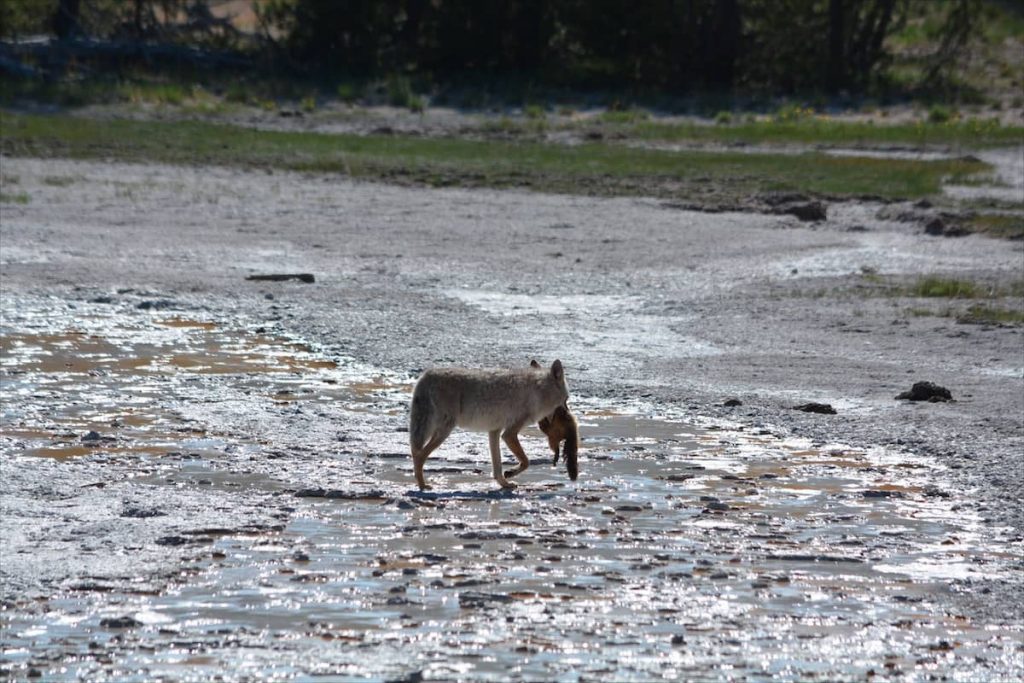 A coyote heads off with his lunch, a yellow-bellied marmot

The Circle of Life is brutal and amazing.

We were dismayed by the plaintive yelp of the marmot left behind. When a marmot yelps, it gives a single alert. A single pulse. He repeats it several times. But the total of the alert is contained in the single pulse.

When we first heard it, it sounded angry. However, after the coyote was dozens of yards away, the yelp echoed of sadness.

Our perceptions of the sounds may have been tainted by our own human emotions. But it sure did sound like sadness. 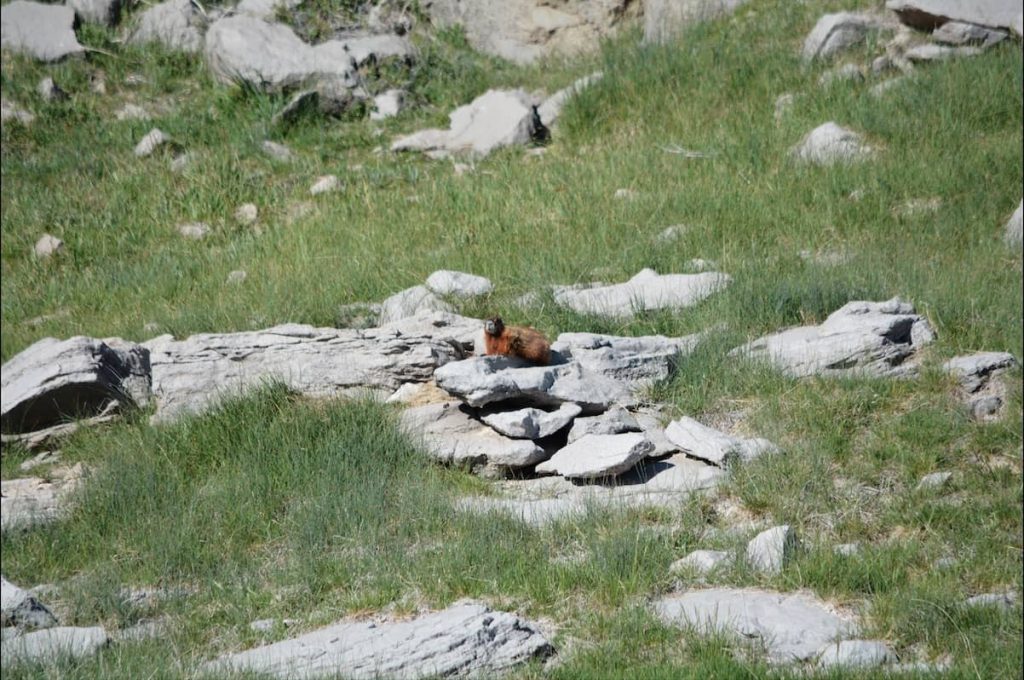 Angry, then sad, this marmot yelped at the coyote stealing away his family member